Check out some of the latest seasonal and limited releases to hit the shelves at Taylor’s! These are some tasty refreshing beers perfect for the summer, spring or relaxing afternoon!

The first foray into our Hop Continuum Series, our flagship IPA infused with blood orange juice, proved so popular that it transcended the series to stand on its own outside as a worthy companion to the original Neon Gypsy.This medium-bodied IPA is clear golden with a thin white head, crisp mouthfeel, and moderately strong 6.5% ABV. Notes of grapefruit, citrus, and pine from a blend of seven hops balances the tart sweetness of blood orange juice for a flavor profile that roams your palate long after the beer’s bittersweet finish. – Brewery Notes

This Tropical IPA is brewed using hops from the US, UK, Germany, Slovenia, and New Zealand. The result is a much more balanced, less bitter but more flavorful Dank-style IPA with hints of Mandarin Orange, Pineapple, Grapefruit, and Elderflower. – Brewery Notes 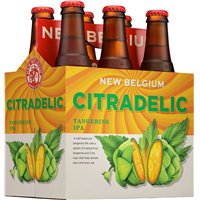 Tune in and hop out with New Belgium Citradelic. Set adrift on a kaleidoscopic wave of hoppiness brought to you by a mystical marriage of Citra hops and tangerine peel, which elevates each sip onto a plane of pure tropical, fruity pleasure. Citradelic’s namesake hop and fruit combine to jam with visions of additional hops like citrusy Mandarina Bavaria, tropical Azzaca, and fruity Galaxy for a colorful explosion that’s grounded by just a touch of malty sweetness. Bored by the status quo? Expand your palate with a pour of Citradelic. Released January 2016. – Brewery Notes

Hot summer nights, jam out to the cooling waves of Heavy Melon Ale, our newest seasonal track. Brewed with juicy watermelon and zesty lime peel, this crushable ale rips with a blast of melon notes. Ripened fruit aromas of melon, papaya and citrus climax with an enticing aroma, and set up an invigorating wash of fruity sweetness, grassy bitterness and the slightest touch of tartness. Super crisp and refreshing from start to finish, Heavy Melon Ale shreds through the summer heat. – Brewery Notes