Here are some Cool New Brews and Recent Arrivals at the Shop!

This is not a seasonal release, this is a ONE TIME release! We were excited when we heard they were bringing a limited amount of its barrel-aged Night Jump Imperial Stout to market. We are one of the few shops around town to grab some and are happy to have it in stock! Aviator Brewing really knocked this one out of the park!

A Baltic-style porter that blends a strong English porter with a Germanic lager approach, fairly robust – this strong black lager has notes of chocolate and coffee with hints of caramelized sugar. Black, Roast, Chocolate.
Our Trail Blazers stray from the beaten path into a world of robust and daring beers featuring bigger, bolder flavors for fueling your spirit of adventure.

The end of the word never tasted so good! Floral bouquet, aromas of honey, spice, coriander, malt, and alcohol with a flavor that is mildly yeasty with a complex palate of malt, fruit and spice notes followed by a smooth, dry finish.

We just got this tasty berliner weisse in from Steel String!

A spruce-infused pale ale, Pennsylvania Tuxedo pays homage to the flannel-suited hunters and gatherers who dwell deep in the backcountry of north-central PA.

Our spiced winter seasonal complements all your holiday festivities. It is typically malty in body, lightly hopped, and rounded out with a delicious mix of spices that vary from year to year as we search for the best vanilla, hazelnut and other flavors. If you see it in the store, don’t wait!

Brewery Notes: Each year since it was first brewed in 1998, Devil’s Milk, the Brewer’s Association of Maryland Governor’s Cup gold medal winner in 2006, 2007 and 2008, has used a different blend of hops to flavor and bitter the beer, making each batch of Devil’s Milk a unique experience. The 2014 vintage of Devil’s Milk epitomizes the American Barleywine. A medium bodied, amber ale with a thin, persistent, off-white head and a complex flavor profile with an assertive hop bill. Mesmerizing citrus flavors and aromas of the palate dominating hop finish and warming alcohol presence (11.5% alcohol by volume). Devil’s Milk is best served in a snifter, both to accommodate its alcohol content and allow the complex flavors inherent in the beer to emerge as it warms in the glass.

Terrapin Beer Co. and The Walking Dead have teamed up to brew the official beer of the undead. Made with blood orange peel, and a horrific amount of hops, this bloodthirsty Red IPA will have you prepared for the upcoming Zombie Apocalypse!

The Unknown Brewing Company and 7venth Sun Brewing collaborated together to create a barrel aged sour they so affectionately call, Rise Against Clowns.

The blood oranges give it a pop of citrus flavor and the cotton candy gets fermented out leaving a subtle vanilla finish. The end result is like a Brett orange creamsicle.

Brewery Notes:  Blood Orange Gose is a tart, refreshing wheat ale that is kettle-soured with lactobacillus and brewed with sea salt and coriander. However, unlike traditional versions of the style, ours features liberal additions of blood oranges during fermentation. This imparts tangy citrus notes that complement the champagne-like flavors, creating a complex and sessionable ale perfect for any occasion.

Brewery Notes: BigLeaf Maple Autumn Red™ is a quaffable, well-balanced American red ale with character. Its malty complexity and coppery color come from a combination of two caramel malts, pale malt, and a hint of maple syrup. To complement these flavors, we used three additions of Nelson Sauvin hops in the brewkettle and a unique blend of Nelson Sauvin, Citra, and Cascade for dry hopping. The result is a distinctive fall seasonal beer with extraordinary depth and intriguing aroma.

Brewery Notes: In Berliner Weisse we think we’ve found the perfect style for our summer Cellar Reserve. This north German wheat beer is traditionally brewed and released very fresh. It has a light body from the wheat and refreshingly tart acidity that make it a perfect summer thirst-quencher. Its lemony tartness is provided by a secondary fermentation with lactobacillus, the same microorganism that’s responsible for yogurt’s tang. That tartness increases and improves with age, so the people of Berlin are known to buy extra bottles to bury in their gardens for two years or more.

Brewery Notes: Viking Fraoch Scottish Sour is the first Fanatical Ale in our Ancient Sour Series. Viking Fraoch (Fraoch is Scandinavian for Heather, a flower native to that area) is a 4,000 year old Viking Heather Flower Ale combined with an 18th Century Scottish Ale that is spontaneously soured with a rich brown hue, balanced tartness and hint of heather flowers. Flavors of caramel, bold tartness and ripe stone fruit give way to lingering flowers and clean, crisp mouthfeel.

Brewery Notes: Open the top and take a look inside, There’s no JUNK in this box! Shtick in a Box® features three 12 oz. bottles of four different styles from the microbrewery’s award-winning portfolio. Shmaltz’s tribute to the little guy and affable underdog, Slingshot American Craft Lager® is guaranteed to hit the craft beer bulls eye every time. Hop Manna IPA® is the answer to hop heads prayers for a delicious IPA bearing floral and citrus flavors. Messiah Nut Brown Ale® is the brown ale you’ve been waiting for with a complex yet smooth blend of bold dark malts revealing hints of chocolate, coffee and toffee paired with a lovely hop character. For this year’s Chanukah 2015,candles won’t be the only thing getting lit. Shmaltz releases Hannukah, Chanukah: Pass The Beer®, a Dark Ale brewed with 8 malts, 8 hops and 8% ABV in homage of those 8 crazy nights.

Brewery Notes: We begin with a rich, dark, English-style ale and then we improvise with spices until we know we have a beer worth sharing with the nation.  Fireside Chat is our early winter seasonal brew available from October through December in six pack cans. Brewed like a classic, warming Strong Ale but with a subtle blend of hand-selected spices for just the right festive flair.

Brewery Notes: This seasonal beer is a limited edition brewed for the short days and long nights of winter. The full body resulting from fermentation in ‘stone Yorkshire squares’ and the luxurious malt character, which will appeal to a broad range of drinkers, is balanced against whole-dried Fuggle and Golding hops with nuances and complexities that should be contemplated before an open fire.

Brewery Notes: Pears weren’t much on our radar when we first built the cidery, because we were all about apples. The challenge was to capture the creaminess of pears while steering clear of its cloying sweetness. The solution is The Pitchfork. It’s still crisp, refreshing hard apple cider, but with a distinctly pear accent and a creamy mouth feel that maintains cider integrity while adding a whole new dimension. Hard to describe, harder still to resist.

Brewery Notes:  A sweet but tart twist on a Belgian-style golden ale.  Pomegranates have been treasured since ancient times and used as symbols of fruitfulness and prosperity. In the modern era, they are prized for their unique sweet-tart flavor and intense red color. The monks of the Abbey of New Clairvaux have grown pomegranates for years, and this incredible fruit acts as a perfect counterpoint for the fruity and spicy Belgian-style golden ale. This collaboration beer features pomegranates grown and harvested by the monks at the Abbey of New Clairvaux.

They call it “Dead Ringer” because that’s what it is… A dead ringer for the Marzen style beers that the Germans celebrate fall with.  A full cornucopia of roasted malt, toffee, dates, red grapes, dark fruit, pears, pumpkin, spice, brown sugar and a little banana from the Bavarian lager yeast

Is your IPA loving palate developed enough to wrap your head around this complex brew from Coronado?  This bad boy’s been hopped to Hell and back, melding the pithiness of Citra with the evergreen character of Simcoe and high Alpha bitterness of Nugget hops to create a well-rounded hop bomb that doesn’t rely on inflated alcohol levels (a reasonable 7%) to trick your mouth into thinking it’s bigger and richer than it really is. 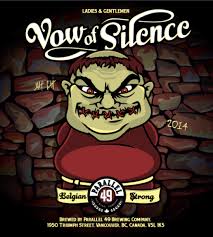 We’ve become big fans of this Canadian brewery lately and this latest brew has only increased our admiration.  Flavors ofsweet caramel, brown sugar with a bit of carmelization, dark dried fruits like raisins/prunes and some nice alcohol phenolics on the finish. A big full bodied beer that is amazingly rich and creamy for a brew with such low carbonation.